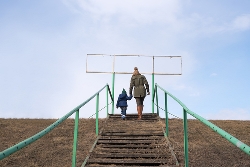 Historically, child custody and visitation has only been granted to biological parents—in some cases, to official adoptive parents. However, as the definition of family has evolved in recent years, and as less traditional family structures have become more common, the court system has found that limiting custody to biological parents is not always the best solution and is not always in the best interest of the child.

In the last decade, Washington State has ruled in favor of several non-biological parents, which the state terms “de facto parents”.

The Parentage of LB

The issue of de facto parenting was first raged during a 2005 custody battle between a lesbian couple residing in Washington State. One woman had a baby with the assistance of artificial insemination and together they raised the child, LB, until she was six years old. At that time, they decided to end their relationship and a custody battle began. The Washington Supreme Court made the historic decision that both partners had rights—even though one person was a non-biological, non-adoptive parent. Why? Because the non-biological parent had acted in all ways like a parent to the child and had formed a parent-like bond with the child.

Generally, to be considered a de facto parent, you must have acted like a parent to the child in all ways, for a significant length of time, and while living with the child. Specifically, in Washington State, the following guidelines must be met:

Four Cases in Which You May Be Able to Argue That You Are a De Facto Parent:

Establishing yourself as a de facto parent is still not common or easy—but it is a viable option in certain child custody and visitation situations. To learn more about your legal options, and whether you may be a de facto parent, contact our Bellevue family law office today—we’re standing by to help.