Can I write my own prenuptial agreement?

When a couple is considering marriage and there are considerable assets involved, the thought of a prenuptial agreement may seem prudent. A prenup is a contract between two would-be marriage partners that determines how assets will be divided in the event of divorce or death of one partner. There are many websites that offer cheap or free “prenuptial agreements” for download, leading people to think that a prenup is a simple document that can be prepared without legal help. However, here’s what you need to know about creating a legal prenuptial agreement for your marriage. 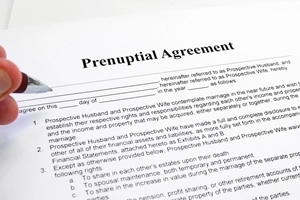 Prenuptials are, at their heart, a type of contract like any other. However, in order to be considered valid and legally enforceable, certain requirements need to be met. The courts generally take a dim view of any document that forces a person to sign away rights that have already been granted by the law. That’s why it’s important not only to have legal representation, but for each partner to actually have separate legal representation when drafting a prenup. You may even enlist the help of a professional mediator to help you negotiate the terms of your prenuptial agreement together.

Your attorneys will help the two of you work out an agreement and draft a prenup document that is agreeable and fair to both parties. Some of the most common provisions addressed in a prenup include:

It’s important to note that child support and child custody are not included in this provisions list because neither are valid items for a prenuptial agreement Your prenup may also include a termination of end-of-contract clause that puts a time limit on the terms of the agreement. After this time has passed, the prenup will no longer be in effect. If a divorce happens after this time, regular state laws on asset division will be used.

When the court is considering whether or not your prenuptial agreement is valid, it will look at a few different factors. The court may invalidate a prenup for the following reasons:

While you can download generic prenuptial forms from many sites on the internet, only an attorney who knows your local and state laws will be able to help you and your partner with an agreement that’s both fair and will stand up to legal scrutiny.​