Is legal separation required before a divorce? 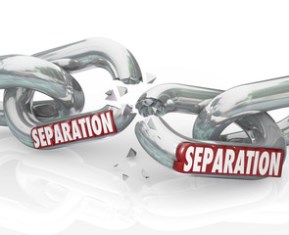 In the state of Washington, legal separation and divorce are actually very similar—but there are a few key differences, including:

The procedures for a legal separation are nearly identical to those of a divorce. The same legal statute in the Washington Revised Code applies to both, and the same standards of asset division are followed. That is, alimony is calculated the same way, parenting plans for child custody are formulated in the same way, and any community property is divided up equally, just as with a divorce. The paperwork filed with the court is also almost identical.

You do not need to legally separate before a divorce. In fact, it may be against your own best interests to do so—many, if not most, legal separations end in divorce anyway. In most situations, a legal separation prolongs the process of starting your new life, since you must wait at least six months to convert a separation to a divorce.

Some couples choose to use this time to engage in marriage counseling or other therapy and attempt to reconcile, under the logic that a six-month deadline provides some incentive to work things out. After all, the decree of separation can be reversed if both parties agree and file a motion with the court. On the other hand, it’s also just as easy to convert the separation into a divorce because the legal separation already has laid the groundwork for the divorce, and both parties have likely been living as though divorced during that time.

Legal Help With a Separation or Divorce

Even if you choose legal separation instead of divorce, it’s still a good idea to have an attorney on your side. Remember that asset division, child custody, and spousal support are all negotiated as a part of legal separation. Should you wish to transition to a divorce after the six-month waiting period is up, you’ll already have an attorney who is familiar with your situation to help protect your rights and ensure that you get your fair share of marital property.

If you have questions or concerns about your legal separation, the Law Offices of Molly B. Kenny is here to help you. To arrange a private consultation in our Bellevue offices, please contact us by phone, or use our contact form to send an email today.