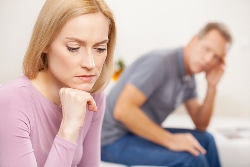 Just what percentages of married people are trapped in unhappy unions? A new divorce study conducted in Great Britain has found that about twenty percent of spouses would like to get divorced and start anew, but lack the courage or resolve to do so.

The study, which was conducted by law firm Slater & Gordon, surveyed 2,000 married people in the United Kingdom. They found that twenty percent of respondents wanted to divorce but were afraid of the consequences – such as financial hardship, starting over, or loneliness.

Here are the top ten reasons those in the study said they were delaying their divorce:

The survey also found that thirty percent of people would not recommend other people to get married, while fifteen percent of people wished they would have married someone else. One out of four people said that they were no longer in love with their spouse. Women who wished to divorce had financial concerns or stated that their relationship was no longer fun. Many men who wished to divorce mentioned a disappointing sexual relationship.

What can we learn from this survey? Those who conducted the study say that it may be an important lesson about why people stay in unhappy marriages – and that it may give those considering divorce the ability to understand why they are stalling. Although divorce is not as ideal as a happy marriage, an unhappy marriage can be stressful, stifling, and unhealthy for your children.