Getting Through a Late-Life Divorce

Many people perceive divorce as something that occurs in younger years, and past a certain point in life, it’s better to stay with your partner, even if you’re unhappy. That line of thinking appears to be changing. As lifespans increase with the help of modern medicine and technology, divorce rates among the baby boomer generation have begun to climb, as more older couples are realizing they have more time than they thought to explore what it means to be happy in their later years. 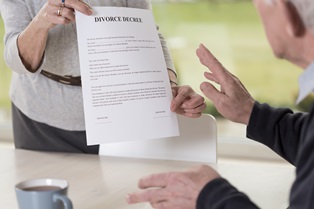 Further study shows a variety of reasons why later-life divorces are becoming more common. These include older couples recognizing that they’ve grown apart from one another, the increased individualism of the modern era, and a greater reluctance to remain trapped in an unhappy marriage for a long period of time. It also may be more common for older couples to begin re-evaluating their marital situations when major life changes happen such as when the children leave the house, reaching retirement age, a financial crisis, or in the face of declining health.

The prospect of a late-life divorce can seem daunting, as it’s a little different than when younger couples with fewer assets decide to end a marriage. Familial ties can be deeper, finances can be deeply intertwined, and a lifetime’s worth of shared property can be at stake. Here are a few things to consider in your late-life divorce:

Get Legal Help With Your Divorce Today

There’s a lot to think about with a later-life divorce. When you’re ready to talk to an attorney about your divorce, the Law Offices of Molly B. Kenny is here to help. We understand the complex issues involved in later-life divorces, including dealing with complex estate plans and high-asset situations, and we’re here to assist you today.

To arrange a private consultation with an experienced attorney at our Bellevue office, call us, or use our contact form to send us an email.